Hey, I'm using Levenshteins algorithm to get distance between source and target string.

also I have method which returns value from 0 to 1:

but this for me is not enough. Because I need more complex way to match two sentences.

For example I want automatically tag some music, I have original song names, and i have songs with trash, like super, quality, years like 2007, 2008, etc..etc.. also some files have just http://trash..thash..song_name_mp3.mp3, other are normal. I want to create an algorithm which will work just more perfect than mine now.. Maybe anyone can help me?

here is my current algo:

This works normally but just in some cases, a lot of titles which should match, does not match... I think I need some kind of formula to play with weights and etc, but i can't think of one..

by the way I already know this topic (My colleague already posted it but we cannot come with a proper solution for this problem.): Approximate string matching algorithms

Your problem here may be distinguishing between noise words and useful data:

You may need to produce a dictionary of noise words to ignore. That seems clunky, but I'm not sure there's an algorithm that can distinguish between band/album names and noise.

Kind of old, but It might be useful to future visitors. If you're already using the Levenshtein algorithm and you need to go a little better, I describe some very effective heuristics in this solution:

Getting the closest string match

The key is that you come up with 3 or 4 (or more) methods of gauging the similarity between your phrases (Levenshtein distance is just one method) - and then using real examples of strings you want to match as similar, you adjust the weightings and combinations of those heuristics until you get something that maximizes the number of positive matches. Then you use that formula for all future matches and you should see great results.

If a user is involved in the process, it's also best if you provide an interface which allows the user to see additional matches that rank highly in similarity in case they disagree with the first choice.

Here's an excerpt from the linked answer. If you end up wanting to use any of this code as is, I apologize in advance for having to convert VBA into C#.

Simple, speedy, and a very useful metric. Using this, I created two separate metrics for evaluating the similarity of two strings. One I call "valuePhrase" and one I call "valueWords". valuePhrase is just the Levenshtein distance between the two phrases, and valueWords splits the string into individual words, based on delimiters such as spaces, dashes, and anything else you'd like, and compares each word to each other word, summing up the shortest Levenshtein distance connecting any two words. Essentially, it measures whether the information in one 'phrase' is really contained in another, just as a word-wise permutation. I spent a few days as a side project coming up with the most efficient way possible of splitting a string based on delimiters.

Using these two metrics, and a third which simply computes the distance between two strings, I have a series of variables which I can run an optimization algorithm to achieve the greatest number of matches. Fuzzy string matching is, itself, a fuzzy science, and so by creating linearly independent metrics for measuring string similarity, and having a known set of strings we wish to match to each other, we can find the parameters that, for our specific styles of strings, give the best fuzzy match results.

As you can see, the last two metrics, which are fuzzy string matching metrics, already have a natural tendency to give low scores to strings that are meant to match (down the diagonal). This is very good.

Application To allow the optimization of fuzzy matching, I weight each metric. As such, every application of fuzzy string match can weight the parameters differently. The formula that defines the final score is a simply combination of the metrics and their weights:

Using an optimization algorithm (neural network is best here because it is a discrete, multi-dimentional problem), the goal is now to maximize the number of matches. I created a function that detects the number of correct matches of each set to each other, as can be seen in this final screenshot. A column or row gets a point if the lowest score is assigned the the string that was meant to be matched, and partial points are given if there is a tie for the lowest score, and the correct match is among the tied matched strings. I then optimized it. You can see that a green cell is the column that best matches the current row, and a blue square around the cell is the row that best matches the current column. The score in the bottom corner is roughly the number of successful matches and this is what we tell our optimization problem to maximize. 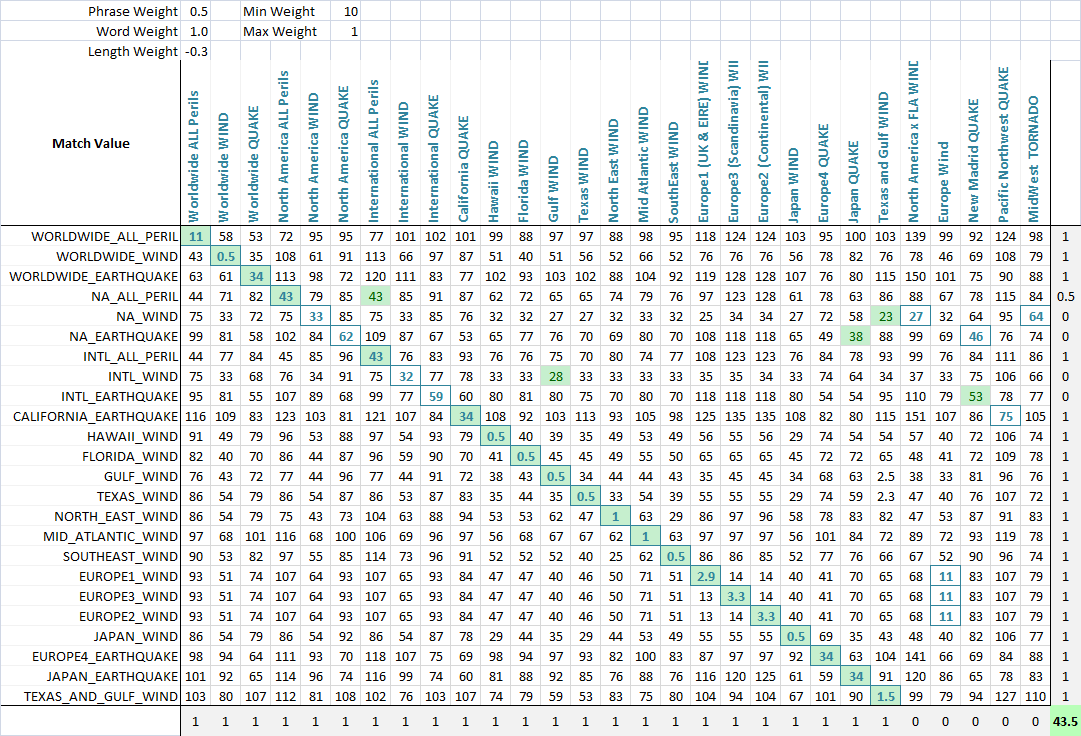